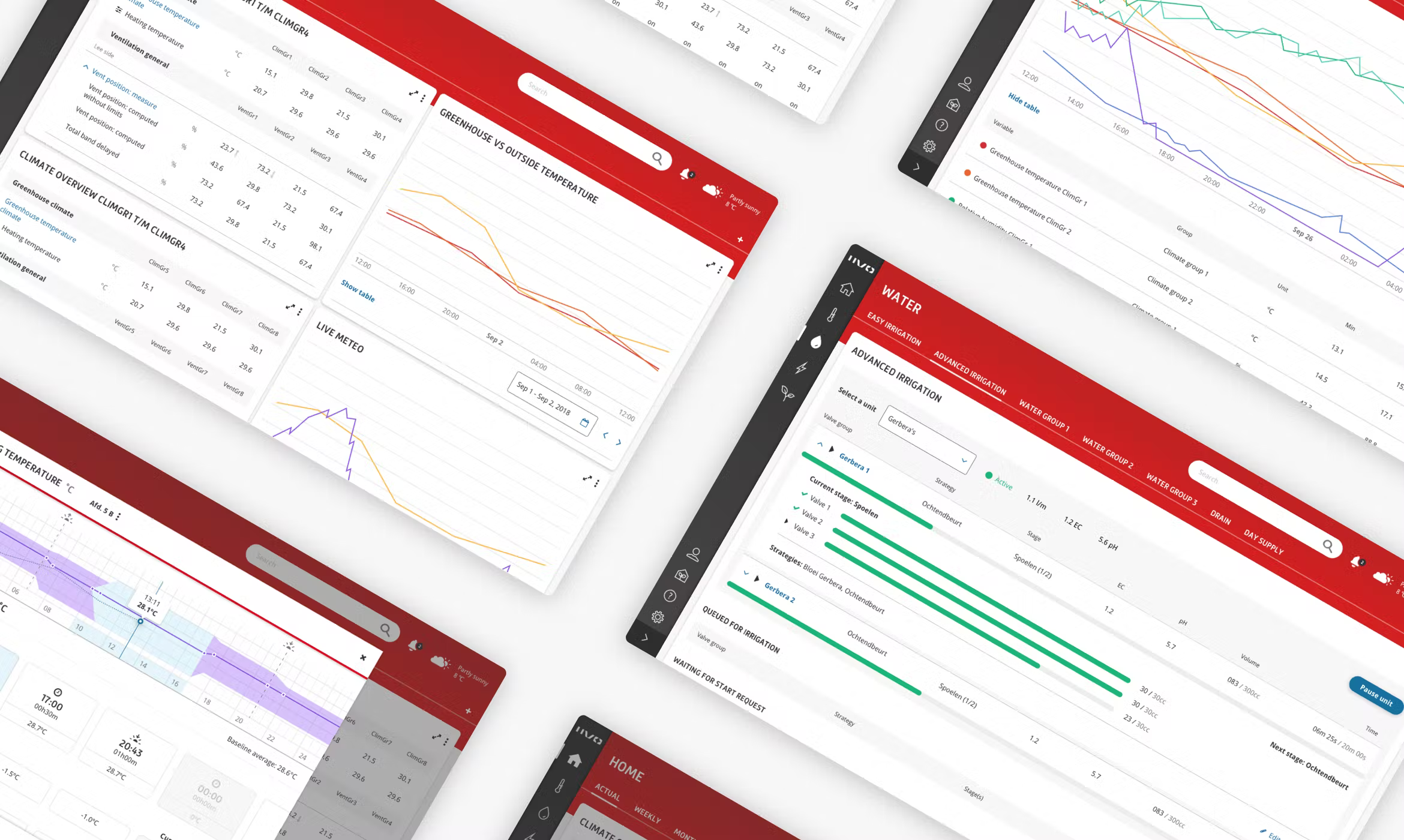 IIVO provides smart technology for greenhouse growers. This truly unique system is capable of monitoring, controlling and maintaining any greenhouse.

See the end result of this project

Hoogendoorn has a growing need to deliver solutions that serve a wide variety of clients with disparate skill bases and requirements. By conducting in-depth client research and usability testing we helped Hoogendoorn develop a UI that met and exceeded client expectations, regardless of their technical knowledge.

The value I delivered

How I did it

This project was a close collaboration with the IIVO development team and visual designer Anke de Kok. As the UX designer I was responsible for the project approach and planning, the information architecture, navigation wireframes, process flowcharts and wireframes and the communication to stakeholders.

At the heart of the IIVO is a completely customisable dashboard, showing growers the data that is important to them. To make sure we understood what that data is, we did a tour of growers and greenhouses of all kinds and sizes. The would show us around their greenhouses, and how they use their current systems. Getting into the domain and gaining as much knowledge as possible on how these processes and these people work proved invaluable in the redesign of the software.

The design of the software was devided by area and by user task. This allowed us to deliver complete workflows and directly workable software. A major boundary in this project was the technical feasibility of the solutions we proposed. We always started ambitiously, if nothing else we would inspire the team, but ultimately the focus was on getting a workable version out there.

Periodic design reviews with the entire team made sure we're on the right track, and let developers know what work was coming their way. My deliverables to the team included wireframes, prototypes and a lot of times lightweight documentation to make sure the knowledge about the design would stay alive within Hoogendoorn after we were gone.

Throughout this project I would focus on two things. The first was to get screens and components and flows out there to facilitate user tasks that were already well thought out in the previous version of the software. The real challenge (and added value and fun) For me was to re-think the way the current processes were handled in the software.

Some of these processes were extremely tech-centered, making them hard to understand for novice users. I enjoyed getting to the core of the problem and the task, before sketching out a new workflow, working with the customer service experts to get a feel of what could be improved, and with the development team to make sure my concepts kept being feasible.

During this project, we put great emphasis on reducing the risk of development through usability testing. A lot of what we were doing was a departure from the previous setup. With the grower target group being known as conservative, we really wanted to check if what we were goin for was not too far out of their comfort zone.

Luckily Hoogendoorn allready had really good contacts with their customers, and a lot of them were willing to test our early prototypes. We conducted a one day usability test at the Hoogendoorn office, which resulted in a list of prioritised improvements and an increased confidence in the team.

The new cloud setup for the IIVO meant the interface could be accessed anywhere, all the time. Historically, growers were bound to their desktop computers in a fixed location in their greenhouse, but the need to take the system with them was there. Some even hacked together a remote solution to make that work. 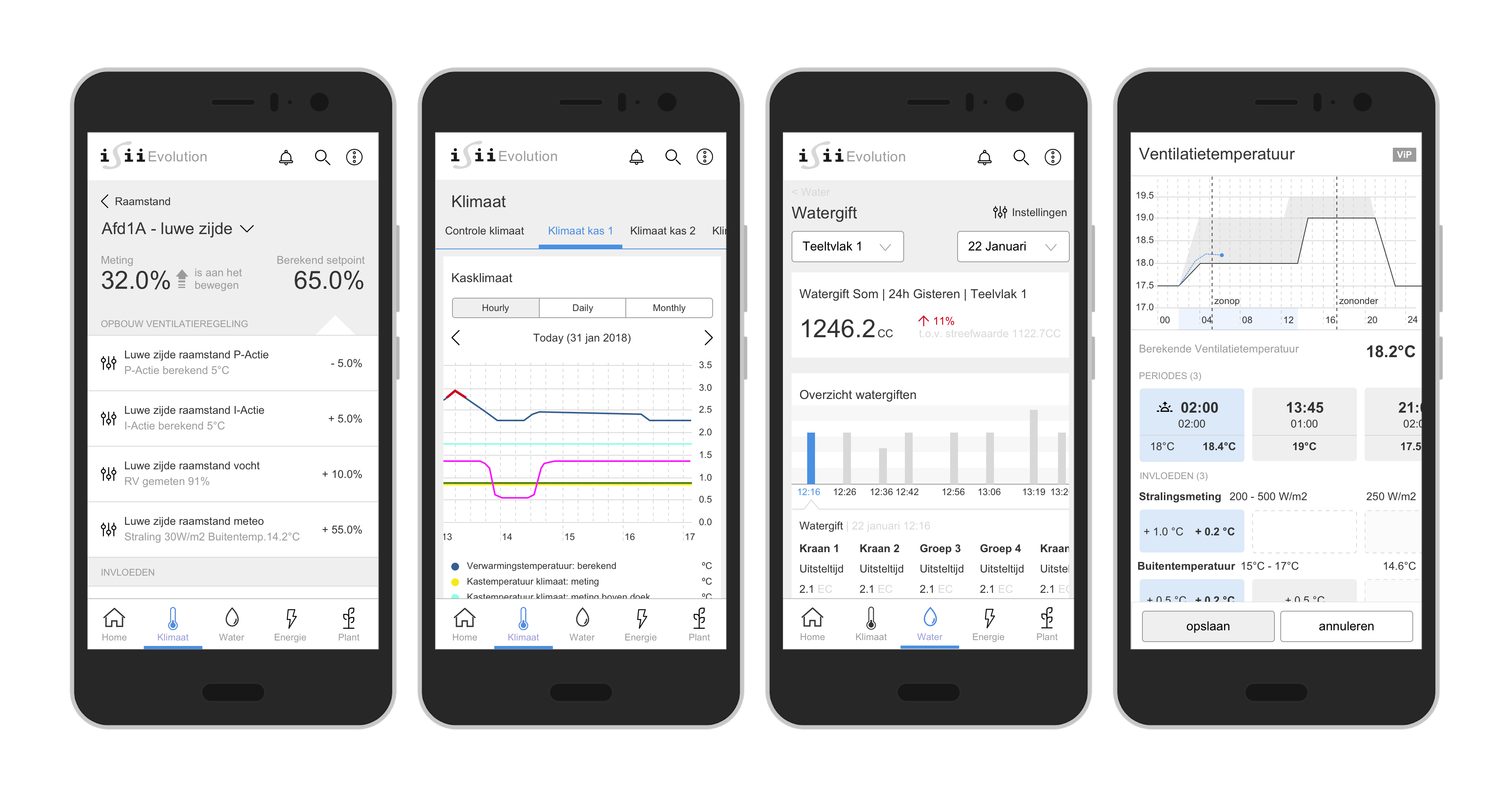 Due to the nature of the info we were displaying, Hoogendoorn questioned the feasibility of a mobile solution. I took great care and pleasure in showing them that everything they wanted the grower to do could also be tackled on a small screen, through smart design.
This means that a grower with the new IIVO can now tackle important tasks on the go, with an interface optimised for their mobile and tablet.

As a business with technology at its core, Hoogendoorn had historically prioritised development over design. The success of this project, coupled with their ongoing need to diversify usability, has encouraged them to think more like designers. As a result, we also helped them set up their own UX team.
The designs we produced for the interface have been well-received by Hoogendoorn’s customers, and the accompanying digital style guide will support Hoogendoorn’s teams as their products evolve.